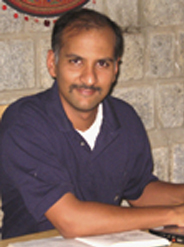 Srinivasan (Vasu) Raghavan obtained his BE and ME degrees in Metallurgy from the Visvesvaraya Regional Engineering College (Now VNIT), Nagpur and the Indian Institute of Science in Bangalore respectively. Following his ME he obtained his PhD from The Pennsylvania State Universityin Materials Science and Engineering. For his PhD he worked on zirconia based materials for thermal barrier coating applications. He continued there as a post doc, working on growth of group III-A (In, Ga, Al) nitride compound semiconductors byMOCVD with Joan Redwing’s group.

Crystal Growth:
Developments in the science and technology of crystal growth have played a vital role in the rapid technological progress in the latter part of the 20th century.

Crystal growth finds applications in areas as diverse as

Professor Srinivasan Raghavan’s research interests encompass all the above areas of crystal growth. He is currently concentrating on growth of the group III-A(Al, Ga, In) nitrides by chemical vapor deposition with particular emphasis on the effects of stress on crystal growth, physical properties and device performance.

Group III-A nitrides: These nitrides by virtue of their band gap (~1-6 eV) are used in a number of opto-electronic applications such as blue, white and ultraviolet light emitting diodes, 400 nm laser diodes and could potentially be used in photovoltaics or solar cells with efficiencies >30%. They are also candidates for the next generation high power-high frequency electronics because of their large break down field strength, high electron saturation velocity and high thermal conductivity. (More) However, in spite of all the impressive strides made in technology, much of the basic science behind the growth of these materials still remains poorly understood. This is so because the poor stability of these nitrides along with the lack of lattice matched substrates makes growth relatively more complicated than for example Si or GaAs based devices. Si and GaAs devices are deposited on Si and GaAs substrates. However, bulk nitride substrates are yet unavailable because of difficulties in processing. Hence, growth is currently done heterogeneously on sapphire (Al2O3), SiC and Si substrates. The lack of wettability, the lattice mismatch between the nitrides and these substrates and the thermal expansion mismatch all contribute to stresses and defects which affect device properties and performance. Thus, growing nitrides is a challenge.

Stresses and Defects: Defects, such as grain boundaries, dislocations and cracks are always detrimental to device performance. In the case of nitride thin films, due to poor wetting of the substrates by the film, growth occurs by nucleation and coalescence of islands. Due to small levels of misalignment between the grains, the process of coalescence generates a grain boundary and dislocations to accommodate the misalignment. The process of coalescence also gives rise to a tensile growth stress. If in addition the epitaxial stresses and the thermal expansion mismatch stress are tensile, then cooling to room temperatures can cause cracking.

While defects are invariably detrimental to device performance, stress could also have benign effects. Strained (or stressed) silicon in which electron mobilities are twice as fast as the unstrained counter parts have been used in Intel Pentium 4 chips (http://www.penstarsys.com/editor/tech/cpu/amd/str_sil/index.html). In GaN/AlGaN high electron mobility transistors for high power-high frequency devices in mobile applications, piezo-electric (or stress induced) polarization effects yield 2DEGs (2-dimensional electron gases) with sheet carrier concentrations in excess of 1013/cm2 close to an undoped GaN/AlGaN interface, with 300 K mobilities greater than 1500 cm2/Vs. Piezo-electric fields have also been shown to effect the optical properties in GaN/AlGaN and GaN/InGaN quantum well structures.

Stress evolution and defect evolution during crystal growth are inter-dependent. For e.g. cracking occurs in response to a tensile stress. Thus, the two need to be studied in tandem. By understanding how these two are related during crystal growth, devices can be grown with low defect levels and the required levels of stress (or strain), a process called strain engineering, to yield the desirable properties.